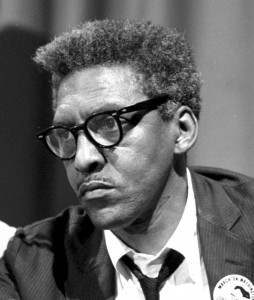 The 50th anniversary of the 1963 March on Washington is later this month. Everyone knows about Dr. King’s “I Have a Dream” speech that he delivered at the rally outside the Lincoln Memorial for this event. What most do not know is that the entire march was conceived and planned by the Shachtmanites. A Philip Randolph conceived it. But Max Shachtman also had a hand in the idea for the march. He also chose Rustin to be the main organizer for the march. When Rustin was caught and arrested for homosexual conduct in a men’s room in Washington, Shachtman (though he was a homophobe) outlined for Bayard a defense of his action. Randolph was being pressured to fire Rustin and Southern Senators, such as Strom Thurmond, were attacking him on the issue of immorality. But as a result of Shachtman’s defense, Rustin continued to be the main organizer of the march (though his official position was downgraded a bit.), and he hired many Shachtmanites such as Norman Hill and Tom Kahn to assist him. At the same time, Bogdan Denitch organized the West Coast version of the march in California. At the rally itself, Kahn wrote the controversial speech by SNCC chair John Lewis in which the advanced text contained attacks on the Kennedy Administration and stated that “the revolution is at hand. We will take matters in our own hands and create a source of power, outside of any national structure that could and would assure us a victory…If any radical social, political and economic changes are to take place in our society, the people, the masses, must bring them about.” Then Att. Gen. Robert F. Kennedy said that Lewis shouldn’t be allowed to deliver his speech at the March. Patrick Cardinal O’Boyle, the Catholic prelate of Washington protested that he wouldn’t deliver the invocation for the rally if Lewis delivered his speech. Randolph, King, Rustin, Kahn and Lewis and other leaders of SNCC argued about revising the speech while the rally had already started. Finally, Lewis agreed to a rewritten speech and he was allowed to address the masses gathered at the Lincoln Memorial. (Lewis is now a Democratic congressman from Atlanta.)

What most history books do not tell you about is the Socialist Party conference that was held in Washington after the rally was over. It was entitled, “Socialist Party National Conference on the Civil Rights Revolution”. This was a 2 day affair held at the Burlington Hotel from Thursday August 29-Friday August 30, 1963. (The SP had a party for Marchers and Conference participants on the evening of August 28th after the conclusion of the March on Washington and rally.) The first session was Thursday morning with the theme: “Toward Full Equality in a Progressive America. Chairman of the session was Richard Parrish ( who was the chairman of the Civil Rights Committee of the United Federation of Teachers, Vice President of the American Federation of Teachers and Treasurer of the Negro-American Labor Council. Parrish was also running on the SP line for a special election for NYC Councilmember at Large in Manhattan and was supported enthusiastically by all factions of the SP.) Speakers were Norman Thomas, Floyd McKissick, Chairman of CORE (spoke in place of James Farmer, who was in jail in Louisiana), A. Philip Randolph and Congressman William Fitts Ryan (D-NY), a leader of the reform Democrats. Special remarks by Samuel H. Friedman, SP VP candidate in 1952 and 1956 and former editor of the Socialist Call. The afternoon session was entitled: “The New Phase: A Prospectus for Civil Rights.” Chairman of the session was long time SP activists Seymour Steinsapir. Speakers were Bayard Rustin, Deputy Director March on Washington. Responding to Rustin’s address were Robert Moses, Field Secretary, Student Non-violent Coordinating Committee, Ike Reynolds, Task Force, CORE and Tom Kahn, Staff, March on Washington. The evening sessions theme was “A Political Strategy for Civil Rights. The sessions’s chairman was Eleanor Holmes, now DC Congressional Delegate Eleanor Holmes Norton. She introduced the conference’s keynote speaker, Max Shachtman, who spoke on the topic, “Drive Out Dixiecrats For Jobs and Freedom.” Responding to Shachtman’s address were Ernest Calloway, President, St Louis Chapter of the Negro-American Labor Council, and Wiloughby Abner, Vice-President, NALC, National Staff, UAW. The final session of the Conference took place on Friday morning. It’s subject was “Fair Employment-Full Employment. The chairman of the meeting was Warren Morse (a name I am unfamiliar with). Speakers were Lewis Carliner, Assistant to the Director, International Affairs Dept., UAW, Norman Hill, Assistant Program Director, CORE, Cleveland Robinson, Secretary Treasurer, District 65 RWDSU, Co-Chairman of March, Herman Roseman, Economist. Closing Remarks and Summary by Norman Thomas.

Thus, well known figures took part in this conference. such as leaders of CORE, SNCC, Randolph, Rustin, Norman Thomas, Norm Hill, Kahn, prominent folk singers like Joan Baez, etc. But my main point is that the Shachtmanites, militant civil rights leaders, labor, were all united seemingly in the same broad realignment movement of the democratic Left. SDS was still also a part of this coalition, despite of Harrington’s tirade against them over the Port Huron Statement, the year before. As long as the Shachtmanite-militant civil rights alliances continued, it would be counter-productive for SDS to seem to be against this realignment coalition. This is the very positive aspect of the Shachtmanites activities in the SP that too many are unfortunately not aware of. Harrington was not at the March. He was in Paris writing his second book, The Accidental Century.

David Hacker is Vice Chair of Social Democrats USA.  The above article is excerpted from a book he is writing about Max Shachtman.  Historical note: The Socialist Party in existence in 1963 was renamed Social Democrats, USA at the contentious 1972 Convention.  Harrington would eventually leave the organization, but organized labor stayed and so did Bayard Rustin, becoming National Chairman.

In 1898, Eugene V. Debs founded the Social Democratic Party of America. The name was changed to the Socialist Party of America in 1903 and stayed that way (with slight variations) until 1972. After a tumultuous December convention, the organization was renamed Social Democrats, USA— a nod back to the party's original name. Today, SDUSA is the last direct link to Debs and the Socialist Party. Our Constitution is the SP Constitution and we have the rights to restart the Socialist Party of America if we would so choose. In the meantime, we focus on education and advocacy. Social Democracy comprises humanity’s boldest experiment — attempt to organize a society of collective justice and individual freedom where everyone receives necessary food, shelter, health care, education, and yet has the freedom to pursue his or her greatest dreams. In other words, achieve a truly civil society where all members are valued. To learn more, click on the upper menu item "About SDUSA".